Temple symposium: Future of Knowledge in the Humanities


The Center for Humanities at Temple

The 2013 CHAT conference asks about the future of knowledge in the humanities. In the twentieth-century American university, the collective fields of the humanities produced, transmitted, and challenged certain kinds of knowledge that set them apart from the knowledge produced in the sciences or fine arts. At the start of the twenty-first century, the humanities are under attack. Confronting severe economic pressures, universities must decide whether to renew or revise their commitment to liberal education. Invited speakers will address this core issue—some call it a“crisis.” Our focus is how knowledge has been, is, and might be sponsored, produced, taught, and valued in higher education. Guiding questions include: What has been the relationship between the “humanities” and the kind of knowledge protected and produced in higher education? What is the relationship between our pedagogical and political commitments? How have we in the past connected the public purpose of higher education to the knowledge taught and produced there? And how might we pursue it in the future? Our speakers are encouraged to provide historical and practical perspectives which these and other questions demand.

Posted by Chris Cagle at 4:30 AM No comments:

In a day long conference on the future of cinema studies, Penn Cinema Studies Program will bring together scholars, film critics, and film industry practitioners who have stood at the cutting edge of the critical and scholarly debates about the technological and institutional transformations in film and media. On the one hand, the disappearance of the celluloid, the redefinition of the image by the digital technology, and the transformation of theatrical viewing onto heterogeneous spaces and devices has put at stake the very existence of the field’s object of study, and has resulted in a kind of cultural pessimism and an obsessive discourse on the mortality of cinema. On the other hand, these developments were accompanied by a renewed and unprecedented vitality and vigor in cinema, the cinema’s widening sphere of influence, and the rebirth of cinephilia. The disciplinary shifts brought a new understanding of the nature of the moving image, its relationship with the real, as well as a new understanding of the history of the medium. Through a dialogue between acclaimed film scholars, critics, and practitioners, we want to think about the significance of film and media studies today and address the ways in which the convergence that defines the landscape of film and media also coincides with a convergence that is institutional and disciplinary.

Posted by Chris Cagle at 4:00 AM No comments:

There's an embarrassment of riches this week, as Penn, Temple, and Slought are organizing a commemorative symposium on Chris Marker's work, with visiting filmmakers to include Agnes Varda. Here's a rundown of events:

My current research considers that pragmatist philosophy offers a productive way through the impasse between traditional film theory and “post-theoretical” or cognitive approaches to film scholarship; a debate that had relatively little interest in, or effect on, the development of African American film practice or black film studies. To make this pragmatic inquiry address African American cinema with some specificity, I suggest an experimental approach to researching and writing about black cinema. Responding to both recent calls for a black cinema studies rooted in African-American cultural practices, and David Bordwell’s claim that film studies has much in common with musicology, I will argue that avant-garde jazz suggests several research and theoretical approaches. But unlike Bordwell’s musical analogies of film form, my target is film theory itself. Black cinema thus becomes an important case study for theorizing aesthetics and politics in cinema, generally. By exploring jazz, pragmatism, and black cultural practices, while following Richard Rorty’s lead in Philosophy and the Mirror of Nature (1981), and Michael Magee’s Emancipating Pragmatism: Emerson, Jazz, and Experimental Writing (2004), I take seriously the possibilities offered by bridging the unique interests between black film analysis, cognitive film theory, screen theory, critical race theory, musicology, deconstruction, and pragmatism.
Posted by Chris Cagle at 7:24 AM No comments:

Interfaces are back, or perhaps they never left. The familiar Socratic conceit from the “Phaedrus” of communication as the process of writing directly on the soul of the other has, since the 1980s and ‘90s, returned to center stage in the discourse around culture and media. Windows, doors, airport gates and other thresholds are those transparent devices that achieve more the less they do: for every moment of virtuosic immersion and connectivity, for every moment of inopacity, the threshold becomes one notch more invisible, one notch more inoperable. This lecture examines the interface, what Gérard Genette called a “zone of indecision” between the inside and outside of media. What is a computer interface and how does it structure interaction, work, and play?

Game designer Jane McGonigal is harnessing the power of Internet games in new ways to help solve some of the biggest challenges facing our world. Her public talk is based on her book Reality Is Broken: Why Games Make us Better and How They Can Change the World, as well as recent game designs. She asks her audience to imagine a world in which every great challenge we face is a quest; where the harder a task is, the more people want to do it; where people take pleasure in failing and come back invigorated; and where they communicate spontaneously with their collaborators to pool their knowledge toward shared solutions. It turns out that world already exists-in games.
Posted by Chris Cagle at 7:22 AM No comments: 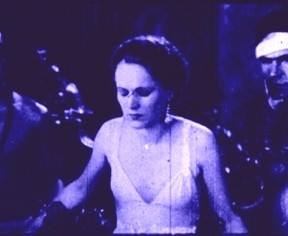 The explosion of scholarship in recent years devoted to Joseph Cornell (1903-1972) has elevated this once marginal artist and avant-garde filmmaker to the center of modern art history. But something curious has happened along the way. Cornell’s ties to surrealism, the very movement that provided him with crucial inspiration and the first meaningful critical context for his art, have been minimized or erased. I will argue that Cornell’s most famous film, Rose Hobart (1936), presents vital opportunities for rethinking how spectatorship functions in surrealist cinema. Where Un Chien andalou (1929) never relinquishes the aura of violence around its relation to the spectator, Rose Hobart is equally but oppositely committed to nurturing the spectator’s vision, to engineering a gradual integration of the spectator’s gaze with that of the star and the filmmaker that relies on slow repetition rather than shocking suddenness. This makes Cornell central, not peripheral, to the ambitions and accomplishments of surrealist cinema’s experiments in spectatorship.

Adam Lowenstein is Associate Professor of English and Film Studies at the University of Pittsburgh, where he also directs the Film Studies Program. He is the author of Shocking Representation: Historical Trauma, National Cinema, and the Modern Horror Film (Columbia University Press, 2005) as well as essays that have appeared in Cinema Journal, Representations, Critical Quarterly, boundary 2, Post Script, and numerous anthologies. He is currently completing a book concerning cinematic spectatorship, surrealism, and the age of digital media.
Posted by Chris Cagle at 4:21 PM No comments:

Adorno's Grey and other refusals
Hito Steyerl
in conversation with Nora M. Alter

Slought Foundation is pleased to announce a public conversation with filmmaker and writer Hito Steyerl, in dialogue with film scholar Nora Alter, on Tuesday, October 9, 2012 from 6:30-8:00pm. The conversation will be preceded by a special screening of Hito Steyerl's Adorno's Grey (approx. 14 min). The program is presented in conjunction with Temple University's Department of Film and Media Arts (FMA).

"In her works, Hito reflects upon the role of traveling images, those images, that crowd the realms of suburbs and the lowlands of the web. Images that change their meaning, outlook, framing, caption and often also their protagonists by traveling through time and space. She put some interesting questions like: Which role do digital modes of communication play in creating new political and aesthetical articulations? How do they accelerate, slow down or modify conflict, civil war and the writing of history? How are media – video or audio tapes, jpegs or posters – implicated in violence? How does the struggle over copyright and reproduction- over making things seen and heard - factor into these considerations? And is a withdrawal from representation perhaps a new form of strike or refusal?" (Rabih Mroue).

About the screening of Adorno's Grey
Legend has it that Theodor W. Adorno had the auditorium where he taught at the Goethe-Universität in Frankfurt painted grey to aid concentration. In Adorno’s Grey, a team of conservators burrows into the wall of this auditorium hoping to reveal the layer of grey paint beneath it. A voiceover recounts an incident in 1969 when, after three female students approached and bore their breasts to him during a lecture, Adorno collected his papers and ran away in a panic. This would be his last lecture.

Hito Steyerl is a filmmaker and writer based in Berlin. She teaches artistic media practice at the University of Arts Berlin. Her latest works include: The Kiss 2012, Adorno's Grey 2012, The Body of the Image 2012 (performance), Abstract 2012, Guards 2012 as well as the lectures Probable Title: Zero Probability (2012) with Rabih Mroué and I dreamed a dream (2012). Nora M. Alter is Chair and Professor of Film and Media arts, Temple University, and the author of Chris Marker.
Posted by Chris Cagle at 7:24 AM No comments:

The Philadelphia Cinema and Media Seminar is run out of the Center for Humanities at Temple University, with additional support from The University of Pennsylvania's Cinema Studies program, the Film Studies program at Bryn Mawr College and Temple's Department of Film and Media Arts. It aims to bring together scholars from colleges and universities in the area to exchange work in the humanities fields of film and media studies.

The seminar consists of a series of monthly academic talks during the school year, consisting of a paper of approximately 45 minutes, followed by a response and a question-and-answer period. Since a fundamental purpose of the seminar is to cultivate intellectual and institutional collaboration, after the seminar, attendees are invited to go out to dinner together at a nearby restaurant.
This blog will also serve as a clearinghouse for announcements of upcoming talks and information on resources for film and media scholars.